A colleague recently asked, “With all the data available to us now, what role, if any, does qualitative research play in b2b prospect intelligence? Isn’t that ‘old thinking’?”

Somewhat in my face, and a tad confrontational, but a good question. To answer the question, I had to take a step back. While stepping, I tripped over a memory of the poem “The Blind Men and the Elephant” by John Godfrey Saxe. 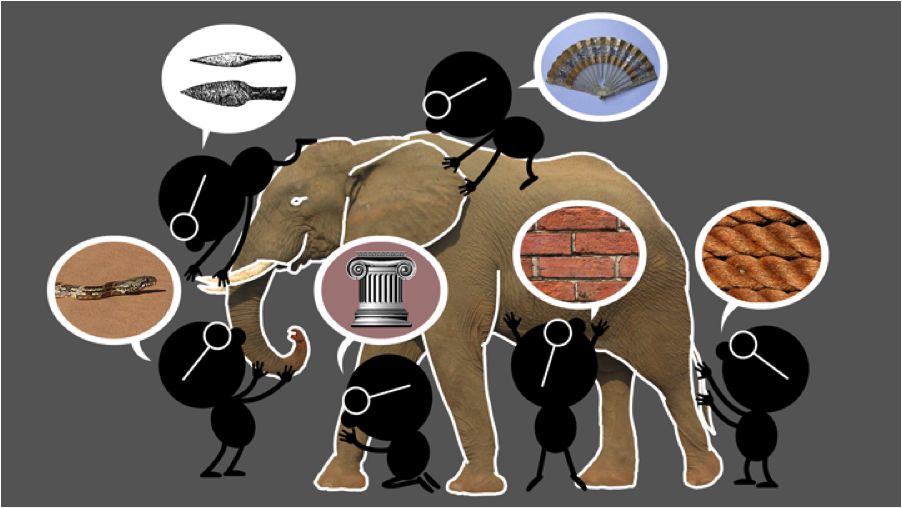 In this poem, 6 blind men go off to find out what an elephant really “looks like”. Each blind man is given an opportunity to touch this strange beast, each from a different angle. Each, per their limited experience, develops their own mental image of an elephant – perhaps a tree, a spear, a fan – and then they talk.

So oft in theologic wars, the disputants, I ween,
Rail on in utter ignorance of what each other mean,
And prate about an Elephant not one of them has seen!

The argument stops just shy of physical violence. No agreement is ever reached. The point is that data analysis leads to just one view of our prospect.

The Elephant in the Room

The prospect is the elephant in the room, and no one perspective, no one point of view yields a true and complete portrait. There is no monopoly on insight, grasshopper.

A three dimensional view of our prospects can only be achieved by a three-sided equation:

To complete prospect intelligence Marketing needs more depth on the real people who we are calling prospects.

All of which is to say that one point of view can be true, but not account for the totality of situation. Putting data analysis together with internal intelligence and persona research, we start to get a glimpse of that strange and wonderful beast.

Or, as the great marketer Groucho Marx once said, yesterday I shot an elephant in my pajamas. What he was doing in my pajamas I’ll never know.